Several scientists have independently predicted that the Earth will encounter a stream of particles originating from a comet  73P/Schwasschmann-Wachmann 3 on the night of May 31, 2022. The Jupiter-family comet was discovered in Hamburg in 1930. In 1995 the comet disintegrated into multiple nuclei and the disruption was also observed from the Astronomical and Geophysical Observatory FMPI UK in Modra. Notably the particles from the disruption from 27 years ago could have created a predicted meteor storm on May 31, 2022.

Apparently the best geometry for ground based observation was expected to be around the Southwestern United States, therefore the Slovak expedition departed to Tucson in Arizona and split into ground-based and airborne observers.

The airborne observations from a jet plane were coordinated in a consortium with scientists from Australia, France, Germany and Slovakia (Juraj Tóth for the Slovak part of the expedition).

Simultaneous observations were made from ground from three distinct locations equipped with a portable all-sky detection systems AMOS, that included spectral cameras. AMOS on ground was operated by T. Paulech (AGO Modra) and P. Vereš (Harvard & Smithsonian Center for Astrophysics, USA). The ground-based and airborne observations were coordinated by J. Toth with the aim to observe the same volume of the space from ground and air, while the jet plane was flying above the ground where the ground-based observers monitored the skies.

Colleagues from public observatories from Banská Bystrica and Kysuckeé Nové Mesto also took a part in ground-based expedition with their own equipment (S.Kaniansky, J.Mäsiar, R.Barsa a J.Ambroz). The ground-based teams acknowledge the local support of professional and amateur astronomers and access to their facilities at Mt. Graham (Vatican Observatory) and the Chiricahua Astronomy Complex (Tucson Amateur Astronomy Association).

The prediction of the increased meteor activity was confirmed and has exceeded the conservative estimates. Increased meteor frequency was observed from the jet plane, ground stations, spectral cameras and several unusual light curves of meteors were captured. The data analysis from multiple instruments is expected to be time consuming. The observations have confirmed the dynamical models of mass leaving the comet’s nucleus and for the first time based on a prediction the meteor shower was observed from a recent dramatic disintegration of a parent comet. The observed data and their subsequent interpretation could help us to understand the composition and dynamical processed of these primordial bodies of the Solar System. 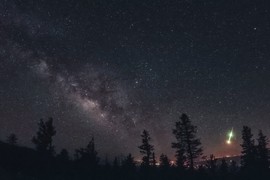