How a crystal transforms into another one

A study of nucleation in the pressure-induced structural phase transition in rocksalt was published on 31 August 2021 in the prestigious physical journal Physical Review Letters. The authors are Matej Badin and Roman Martoňák from the Department of Experimental Physics of the Faculty of Mathematics, Physics and Informatics, Comenius University in Bratislava.

At sufficiently high pressure the arrangement of atoms in a crystal changes. The atoms move away from their original positions and find new ones, creating a new structure which can have very different properties. Example is the change of graphite to diamond and generally such process is called a structural phase transition.

But how exactly such transition proceeds? Do we understand it theoretically and can we simulate it on a computer? And is it really important to understand the details?

This task might appear simple, but it is not. It is complicated since the change must start somewhere. First a small part of the crystal transforms, still embedded in the parent structure to which it must accommodate. This process is called creation of a nucleus of the new structure. Only when the nucleus reaches certain critical size it starts to grow spontaneously and eventually the change extends to the whole system. The approach used so far was based on a simplification, considering only few atoms - so called unit cell which upon repeating in all directions creates the whole crystal. This approach, however, entirely ignores nucleation (simply put, all atoms do the same thing at the same time) and by construction cannot provide realistic results.

The problem of a realistic simulation of the formation of a nucleus was studied by Matej Badin (PhD student at SISSA Trieste and Faculty of Mathematics, Physics and Informatics of the Comenius University in Bratislava) in the research group of Prof. Roman Martoňák at the Department of Experimental Physics. Employing the so-called metadynamics method (A. Laio and M. Parrinello 2002)  they studied the structural transition in a well-known system - rocksalt NaCl. We know from school that the atoms in rocksalt are arranged in such way that each atom is surrounded by 6 atoms of the opposite type. At pressure of 200000 atmospheric pressures this arrangement changes and in the new structure each atom has 8 neighbours of the opposite type. This property - a change of the number of neighbours, was used by the authors in the construction of the simulation method. In the computer simulation of big systems (the largest one had 64000 atoms) it was possible to directly observe the formation of the nucleus (see figure) and explore its properties. The process can be observed in the animation.

The possibility of simulation of the nucleation processes opens new ways towards substantially better understanding of structural transitions and their systematic application to synthesis of new materials with interesting properties. It is generally believed that defects (regions in the parent crystal structure where the atoms are not arranged properly), for example so-called dislocations or grain boundaries, may play a a major role in nucleation. In simple terms, the change starts where the parent structure is already partially broken. The new simulation method should naturally allow the simulation of systems with such defects which was not possible with the previous techniques.

Nucleating a Different Coordination in a Crystal under Pressure: A Study of the B1−B2 Transition in NaCl by Metadynamics,
Matej Badin and Roman Martoňák, Phys. Rev. Lett. 127, 105701 – Published 31 August 2021 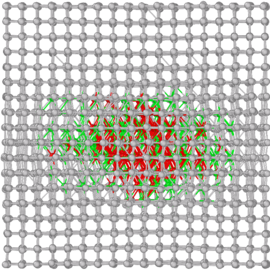