[SiS2 belongs to the class of AB2 compounds of group IV-VI elements which includes  important materials such as SiO2, CO2 and CS2. As far as these compounds are isoelectronic, one could assume they might adopt similar or even the same crystal structures. This analogy is, however, not manifested at normal conditions where SiO2 exists in crystalline form as mineral quartz, while CO2 a CS2 exist in molecular forms as gas and liquid, respectively. Quartz is one of the most important minerals in the Earth's crust and the characteristic feature of its structure is tetrahedral arrangement of bonds where each Si atom is surrounded by four O atoms forming a regular tetrahedron. The central Si atom is bonded to other Si atoms with single bonds via oxygen atom (Si-O-Si) and the neighboring tetrahedra share a common corner. The network of all SiO4 tetrahedra forms a regular 3D structure. In contrast, in gaseous molecular form of CO2 and in liquid molecular form of CS2 carbon atoms in linear molecules create double bonds with atoms of oxygen (O=C=O) or sulfur. At low temperatures these compounds form molecular crystals and e.g. solid CO2 is a well-known material called “dry ice”.

Pressure, besides temperature, represents another important external parameter which determines crystal structure of matter. Investigation of phase diagrams of elements and compounds in ever broader ranges of pressure and temperature provides fundamental information about structure and properties of matter and is also important for potential practical application of respective phases. In our case, pressure is the key variable for discovering structural analogies between the AB2 IV-VI compounds. Tetrahedral structures similar to those known in SiO2 are created in CO2 a CS2 only under high pressures of order of tens of GPa. At these conditions double bonds in molecules are destabilized and replaced by single bonds thus allowing for formation of tetrahedral structures. In this manner e.g. CO2 adopts structure similar to β-cristobalite which is the high-temperature form of mineral cristobalite known in SiO2. In the case of CS2 the existence of tetrahedral structures under high pressure was predicted theoretically, but so far only a disordered form was experimentally prepared.

Until recently SiS2 was the least investigated compound from the above mentioned group. Under normal conditions it forms a tetrahedral structure (NP) which, however, differs from those found in SiO2 or CO2 at high pressure. The NP structure is formed by 1D chains in which neighboring tetrahedra share common edges, but there are no bonds between neighboring chains. The details of behavior of SiS2 at higher pressures were experimentally determined in 2015, but only up to a rather low pressure of 6 GPa. The experimental group in Germany showed [1] that under compression the tetrahedral coordination is preserved, but the system undergoes a series of non-trivial phase transitions between several structures. First, a 2D layered structure HP1 is formed from 1D chains of tetrahedra, followed by a more complicated 3D structure HP2 and finally below 6 GPa another (less complicated) 3D structure HP3 is formed. The HP3 structure is similar to SiO2 β-cristobalite and is practically identical to the structure of CO2 at high pressure. Further structural evolution under increasing pressure was not known either experimentally or theoretically. Based on the analogy with SiO2 one might imagine two scenarios. One could be a creation of some denser tetrahedral structure with more complicated arrangement of tetrahedra which could be similar e.g. to mineral coesite. Another possibility could be formation of a 3D phase with octahedral coordination similar e.g. to mineral stishovite which is abundant in the Earth's mantle and which was also discovered in the meteoritic crater in Arizona, USA.

In our research group which focuses on computational condensed matter physics we studied in the past decade structure and physical properties of SiO2, CO2 and CS2 under high pressures [2,3,4,5], also in collaboration with some foreign institutions (ETH Zürich, NRC Ottawa, SISSA a ICTP Trieste). The lack of knowledge of structure and properties of SiS2 at pressures higher than 6 GPa therefore motivated us to undertake a fresh theoretical investigation. Our prediction is based on genetic algorithm optimization technique in connection with ab initio calculations of total energy (employing density-functional theory) which is nowadays known to provide reliable prediction of crystal structures. It turned out that simple analogies do not always work and Nature provided us with a little surprise. A stable phase of SiS2 in relatively broad range of pressures between 4 and at least 100 GPa (a million times higher pressure than the atmospheric) has CdI2-type structure with space group P-3m1 in which the structural units are regular octahedra. Surprisingly, however, the octahedra are not connected in a 3D network but form 2D layers. The dimensionality of SiS2 structure upon increase of pressure therefore undergoes a non-trivial evolution 1D -> 2D -> 3D -> 2D. Since our theoretical results provide new information about important class of materials, we expect that they will be experimentally verified in one of research centers for high-pressure physics in the world. 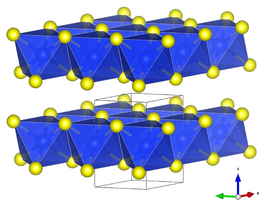