Bratislava/Teide, Tenerife June 28th, 2015. On the occasion of the 30th anniversary of astronomical observatories in the Canary Islands the Spanish king Felipe VI inaugurated seven new robotic systems at the Teide observatory, Tenerife. The ceremony took place on June 27th, 2015. Slovakia was represented by a unique AMOS ( All-sky Meteor Orbit System) device created at the Comenius University in Bratislava.

Co-designer of the system, Dr. Juraj Tóth, PhD. of the Faculty of Mathematics, Physics and Informatics, introduced to His Majesty the extraordinary equipment installed by Slovak astronomers in both Canary observatories in March 2015. He also showed a fragment of a meteorite found in 2010 near Košice to exemplify recent meteorite impact in Tenerife observed by the AMOS double camera system.

King Felipe VI held an inauguration speech in which he appreciated the contribution of observatories and new equipment in Canary Islands to progress in astronomy.

Due to excellent observation conditions, legislative protection against light pollution and constructive cooperation of more than 20 countries including Slovakia, the observatories in Tenerife and La Palma islands belong to prominent research facilities in the world. 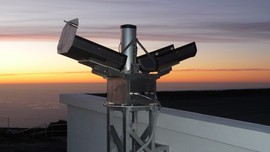 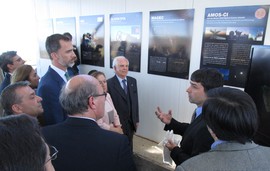