In May 2015 the Accreditation committee assessed the pilot project in identification of top teams at Slovak universities. Seven teams of FMPI won the title, which is more than with any other faculty in the country.

In April 2014 the Accreditation committee approved the “Identification of top research teams at the universities and colleges in Slovakia” project. The deans were encouraged to submit to the committee lists of research teams at their faculties and the committee decided which of them qualify for the title. Publications and citations were the main criteria. The results were announced in May 2015 and FMPI won the first position in the number of top teams.

What do the top teams at our faculty involve in?

The Physics of Complex Systems Centre is focused on theoretical and experimental solid-state physics, i.a. research in superconductivity. Nuclear physics is represented by an associated Team of massive neutrinos, underground laboratories and nuclear structure, investigating e.g. into exotic double beta decay. The team Physics of plasma and elementary plasma processes includes a group of experimental physicists studying e.g. discharges in gases. Geophysics is represented by the Team for numeric modelling of seismic motion, engaging in computer simulations of the Earth´s motions during quakes.

Mathematics is represented by two groups. The Bratislava school of qualitative theory of differential equations deals with overall properties of equations, which describe majority of natural phenomena. The equations express variations in quantities with continuous changes in time, space and other parameters. Discrete mathematics treating discontinuous changes is represented by the Graphs, maps and other discrete structures team. Last but not least is mathematical statistics applied in the Invasive biology and ecomorphology of fish team, which is a joint team of FMPI and the Faculty of Natural Sciences.

Scientometric parameters like numbers of publications and citations do not precisely reflect the quality of research and science work and in Slovakia there are many top scientists not associated with any of top teams meeting the Accreditation committee´s specifications.  On the other hand, to be credited the top team position can only result from exceptional achievements at a European level. The first place in the number of such teams doesn´t fully testify the quality of our faculty´s research, however, is some evidence of it. 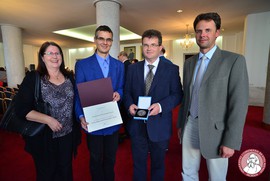