Evolution of killer whales is compelled by cultural impact

That is the outcome of a study published on May 31st, 2016 in the Nature Communications magazine, which was initiated by Dr. Andrew Foote of the Bern University. Dr. Vinař of the Faculty of Mathematics, Physics and Informatics of the Comenius University in Bratislava participated in the study.

Killer whales are a geographically widespread species, which was able to adapt to specific ecological conditions in different parts of the world. They live in stable pods specializing in diverse species of prey ranging from fish or birds to sea mammals, like seals. The pods have developed sophisticated hunting strategies. Previous opinions suggested that effective hunting skills are passed from parental generations onto progeny by learning.

Studying genomes of 50 killer whales Dr. Foote´s research team showed that within the last 250,000 years of evolution significant changes occurred in genes linked with the choice of environment, feeding habits or reproduction. The finds suggest that while originally the specialization of separate groups probably was due to cultural level, by natural selection it gradually was imprinted into the genomes of individuals who now constitute distinct population groups also at the genetic level.

“Computational biology with processing of whole-genome data and comparisons of different genomes. Our assignment in this project was to prepare data of genomes of different species for further statistical analysis,” says Dr. Vinař of FMPI. He had collaborated with Dr. Foote in his previous project investigating into the convergent evolution of different sea mammal species. In the paper published in 2015 in the Nature Genetics magazine they showed that some features in the genomes of sea mammals evolved under positive selection several times independently.

“Co-operation in such projects is of high interest to us. It allows us to use our technical expertise in computer science and statistics to study interesting problems in biology,” adds Dr. Vinař. “Solution of such project requires collecting huge amounts of data and bringing together experts of diverse fields. Although in Slovakia there are researchers well able to carry out such project, national funding in our country would be insufficient for it.” 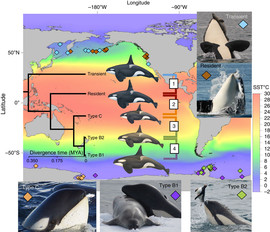