Two awards Scientist of the Year for FMPI

Two of five Scientist of the Year awards went to the Faculty of Mathematics, Physics and Informatics in the 19th Science of the Year Contest 2015. The ceremony took place on May 10th , 2016 in Primaciálny palác, Bratislava. Associate Professor Dr. Tomáš Plecenik, PhD, won the award in the Young Science Personality category, and Professor Tibor Hianik, DrSc, received award in the category Personality of the Year in the EU Programmes.

Associate Professor Dr. Tomáš Plecenik, PhD, won the award for outstanding research and publication achievements in solid-state physics using nanotechnologies in sensors, biomaterials and superconductive substances. In the Laboratory of Advanced Technologies Dr. Plecenik and his team engage in research associated with the development and study of the properties of chemoresistant    gas sensors on thin-layer metal oxide base. They have designed a novel type of hydrogen sensor with unprecedented feedback, working at room temperature. This type of sensor is of importance in car production, namely in hydrogen-fueled electromobiles, filling stations selling hydrogen, and also in other industrial facilities using hydrogen.

Professor Tibor Hianik , DrSc., received the award Personality of the Year in the EU Programmes  for his contribution to the development of biosensors for the diagnosis of prion diseases, for monitoring food quality and contamination and for monitoring environmental pollution. Since 1995 prof. Hianik has been solving projects in all EU framework programmes, working as a member of the COST management, and has been responsible for the solution of the INTAS and MNT-ERA Net projects and for Slovakia-Hungary cross-border co-operation project.  Among his major project-managing achievements is the preparation of a project in the H2020-MSCA-RISE programme „Innovative technology for the detection of enzyme activity in milk“ (FORMILK). In collaboration with leading universities and research facilities and companies from USA, Canada, Ireland and Hungary he coordinated a project including 10 teams, which was highly valued by experts and consequently funded by the Horizon 2020 programme. 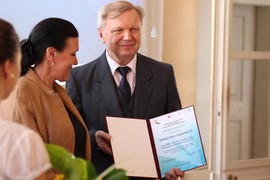 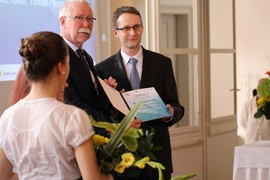