Faculty of Mathematics, Physics, and Informatics Prof. FEČKAN selected Scientist of the Year 2017

21st annual celebration of important Slovak scientists, technology experts and young researchers from all areas of science and technology took place in the Mirror Hall of the Primas’ Palace in Bratislava on May 15, 2018. The title `Scientist of the Year 2017’ was awarded to Prof. RNDr. Michal Fečkan, DrSc., from the Faculty of Mathematics, Physics and Informatics of the Comenius University. He was selected based on his exceptional publication activity during the year 2017 which included the publication of a monography as well as 18 articles published in prestigious mathematical journals, and also with regard to his excellent results from the preceding years.

Prof. RNDr. Michal Fečkan, DrSc. is one of the most important Slovak mathematicians of his generation. He is a member of the Department of Mathematical Analysis and Numerical Mathematics at the Faculty of Mathematics, Physics and Informatics of the Comenius University (FMFI UK). He oversees the Masters program in Managerial Mathematics and the doctoral program in Numerical Mathematics and Scientific Calculations at FMFI UK. His scientific interests include non-linear functional analysis, dynamical systems and their applications. He studied the existence of periodic, chaotic and other solutions of non-linear dynamical systems in finite and infinite dimensional spaces. He also considered the dynamics of the oscillators with dry friction, partial differential equations describing the vibrations of rods, and fractional differential and difference equations. He also made important contributions to applications in Economics which he studied both analytically and numerically. He developed existence theorems for non-linear differential equations using topological and variations methods. He researched qualitative properties of discreditations of differential equations. The majority of these results appeared in his five monographs.

The aim of the `Scientist of the Year’ event is to advance and emphasize the professional and social status of the leading Slovak scientific personalities and to add to the visualization of the best scientific results obtained in Slovakia. The event is organized by the Center for Scientific and Technical Information of the Slovak Republic, by the Slovak Academy of Sciences, and the Union of the Slovakian Scientific and Technological Societies. The event took place under the auspices of the President of the Slovak Republic Andrej Kiska and the Minister of Education, Science, Research and Sports Martina Lubyová. 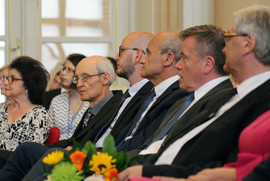 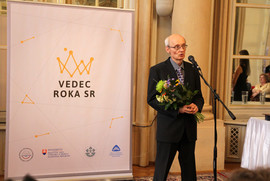