Comenius University scientists are among the foremost personalities in Slovak science

Two of the most prominent scientific personalities in Slovakia work at Comenius University in Bratislava.

According to the survey, two thirds of people are interested in science. However, 64% of the respondents could not name any Slovak scientific success and 80% could not even name a Slovak scientist. 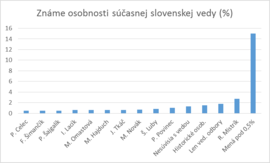 Survey of perceptions of science and scientists in Slovakia. Sources: www.2muse.sk; SME.sk