The crossed-beams experiment of electrons and molecules at the Department of experimental physics helps with analysis of astronomical observations. Results published in renowned Astrophysical Journal.

The group of prof. Matejčík at the Department of experimental physics of Faculty of mathematics, physics and informatics focuses on the electron-molecule processes in a long term. The laboratory of electron induced fluorescence aims at studies of excitation reactions and emission spectra of atoms and molecules. Results are significant not only for basic research but also as reference spectra for optical emission spectroscopy of discharges, atmospheric phenomena and also in the field of astronomy.

One of the most significant studies of the laboratory published in The Astrophysical Journal in 2017 focused on electron induced fluorescence of acetylene1 was aimed at this field as well. Acetylene is the smallest hydrocarbon with triple bond between carbon atoms. From astrophysical point of view it is relevant especially due to its high abundance in space. The radical C2H which can be created from acetylene by electron or photon impact belongs among most frequent molecules as well. It is present in the clouds and even in the areas of star formation. The presence of acetylene was confirmed also in the atmosphere of Titan by Cassini probe.

In the laboratory of electron induced fluorescence the acetylene study was focused on the spectral region from 190 nm to 660 nm. At electron impact with energies between 5 – 100 eV dissociative excitations and dissociative ionizations with excitation of ions dominated. In the spectrum the lines from hydrogen Balmer series and carbon atoms were detected as well as molecular bands corresponding to the transitions CH(A-X), CH(B-X), CH+(B-A) a C2. The detection of continual radiation of C2H(A-X) was also significant part of the publication. For most of the detected transitions absolute excitation-emission cross sections and threshold energies were determined, several of them for the first time.

This study of astronomically relevant molecule has also contributed to the start of the cooperation between group of prof. Matejčík and Dr. Dennis Bodewits (University of Maryland), who is member of the research team of the mission Rosetta of the European space agency. The aim of the cooperation is laboratory study of the molecules present in the coma of the comet 67P/Churyumov-Gerasimenko at the Department of Experimental Physics. 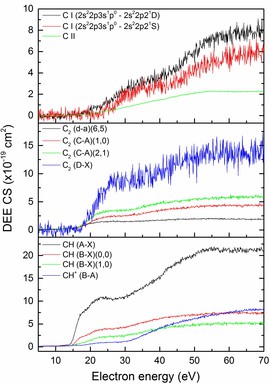