The first Horizon 2020 project with Comenius University in Bratislava as the main coordinator organized a closing conference focusing on excellence. Discussions and presentations on excellence and the differences between institutions took place with the international participation of invited guests and project partners from the University of Innsbruck in Austria and the United Kingdom’s Open University.

The ELEvaTE (Achievement of Excellence in Electron Processes for Future Technologies) project is the first Slovak project in the Twinning framework. Professor Štefan Matejčík’s research group and the Project Support Centre at Comenius University had 36 months of various activities, including training stays at partner institutions, participation in international conferences and workshops, and the organization of several scientific events. The project saw intensive exchanges of research and managerial staff between partner universities. In partnership with the University of Innsbruck’s Institute of Ion Physics and the Open University’s Molecular Physics Group, the project has sought to improve the Electron and Plasma Physics Laboratory to see it become a European Centre of Excellence with an international impact by improving the quality of the work of its scientists and researchers.

The closing conference was the culmination of the project, which brought together early-stage and experienced scientists and researchers with experts with communication, technology transfer, and project management of international grant programmes. The main task of the conference was also to inspire peers from other universities and initiate a discussion among participants. Professor Matejčík highlighted the need to build support structures for project preparation at national and international levels.

Comenius University Rector, Professor Karol Mičieta, pointed out the importance of the university’s participation in Horizon 2020 projects. The University of Innsbruck Rector, Professor Tilmann Märk, revealed his tips for success in turning a university of regional importance into one of the top one to two percent of universities internationally. As major factors in achieving a successful university of excellence, he mentioned legislative and organizational changes that support the emergence of the university’s own inter- and multidisciplinary research areas and platforms, the enhancement of the competencies and facilities of project centres, the development of knowledge transfer, and international cooperation.

On 5 November 2018, he also expressed his interest in further working with Comenius University by signing an agreement to extend and expand cooperation between the two universities (which has been in force since 2006) to support the exchange of scientists and researchers and the further development of administrative staff. One extraordinary benefit of collaboration is the offer of a two-month-long visiting professor’s position at the University of Innsbruck for a Comenius University academic.

Representing the Open University, Professor Nigel Mason highlighted the excellence of scientific centres as a process which is directed by a community of experts; therefore, cooperation and the sharing of experiences through the ELEvaTE project is something seen as a benefit for Comenius University as well as the other universities involved. With the agreement of participants, Professor Mason emphasized that infrastructure is not just about laboratories but is mainly about people. A support structure within universities is key to success. Building networks, sending people abroad to other institutions, and improving experience at all levels are major steps in increasing excellence.

The main achievement of the project has been the promotion of the Electron and Plasma Physics Laboratory internationally and the increasing of its competitiveness within Europe as well as the improvement of support activities. 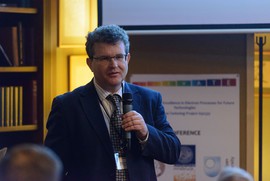 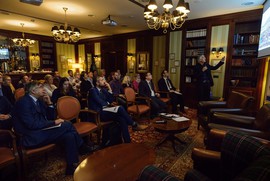 The presentation by University of Innsbruck Rector, Professor Tilmann Märk 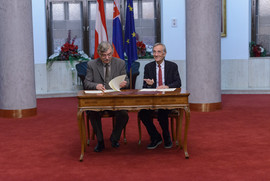