The formation of sea ice in the polar oceans and the development of defects in metal casts may seem like two unrelated processes, but they have one important feature in common: the occurrence of a so-called mushy layer. Mushy layers host complex dynamics of fluid flow, thermal and chemical transport, phase transformations, nonlinear dynamics and pattern formation. The consequences can be significant, ranging from degradation of industrially cast turbine blades for aerospace and energy industries to global climate change.

Mushy layers are multiphase porous mixtures of dendritic solids and solute-rich interstitial fluid, which arise during the solidification of multicomponent alloys. In a paper entitled “Mushy-layer convection”, we present the results of mathematical modelling of the phase change and fluid flow in the mushy layers arising during the solidification of binary and ternary alloys. The mushy layer equations are derived by applying the general principles of continuum mechanics to control volumes containing representative samples of both phases. The model consistently describes the interactions between solidification and convection in mushy layers: fluid flow causes the advective transport of heat and solutes, which in turn affects the local solidification rate.

Convection in mushy layers can be localized and form narrow solid-free channels, or chimneys, which are oriented parallel to the growth direction. This process was directly observed in recent computer simulations of sea-ice evolution using an advanced numerical scheme based on the enthalpy method. In materials engineering, these channels are associated with structural defects in the resulting alloy (ingot).

This work was supported by the Slovak Research and Development Agency under the contract No. APVV-18-0308. 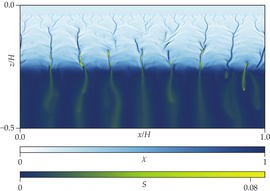 Simulated sea-ice growth obtained by employing the enthalpy method. The system is cooled from above, the ice grows downwards. Localised saline plumes (yelow) sink from the sea-ice mushy layer into the ocean (blue) via vertical brine channels.