Faculty of Mathematics, Physics and Informatics > Division of Astronomy and Astrophysics > Research > Meteors

For more than 15 years astrometric and photometric observations of asteroids and comets have been made at the Astronomical and Geophysical Observatory (AGO) of the Comenius University in Modra, as well as all-sky photographic meteor observations using photographic cameras Zeiss Distagonfitted with 3.5/30mm fish-eye lenses. Two meteor photographic cameras work one in fixed and another in a guided mode. Our station No. 21 Modra is a part of the European Network (EN) for fireball detection coordinated by Ondřejov Observatory, Czech Republic. In the past, we had used TV cameras for major meteor showers observations. Recently we have developed new fish-eye TV system to be used mainly for minor meteor shower observations (poster). 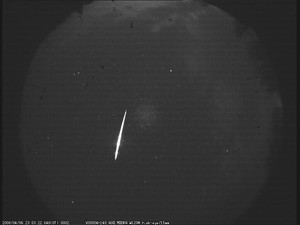 The new fish-eye TV meteor system has started regular observations on April 1, 2007. The system consists of a fish-eye Canon 2.4/15mm objective, 2 Mullard image intensifier, Meopta 1.9/16mm lens and a Watec 120N camera. The analog video signal is digitized in real time and analysed by "UFOCapture software (author SonotaCo), which is able to detect any moving objects including meteors. The resolution of the system is 720x540 (15 arcmin/px) corresponding to a field of view of 170°x140°. The limiting stellar magnitude is +5.5m and meteors up to the magnitude +3m are detected. The system operates autonomously. 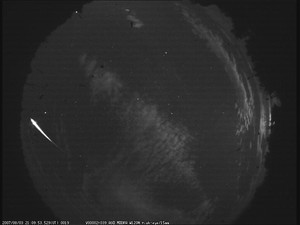 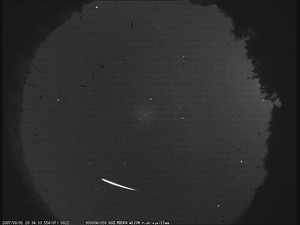 The astrometric precision of this fish-eye TV system is quite good. The standard deviation for more than 50 stars reduced by the "UFOAnalyserV2" is less than 0.05° for zenithal distances up to 60°. Also we have tested the position accuracy for several stars and planets near the horizon, where the astrometric precision of the measurement decreases up to 0.5°. The fourth order polynomial expansion used by UFOAnalyserV2 is insufficient to correct fish-eye projection, especially near horizon. 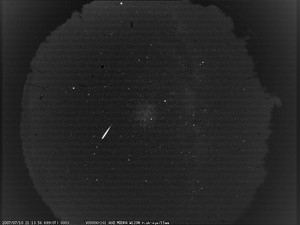 Our TV system operating as a single station worked 27 nights (199 hours) during April 2007, including nights with the bright Moon. In total 300 meteors were detected. Seventy-four meteors were Lyrids based in their radiantposition and angular velocity. The sporadic meteor frequency was in the range of 0.5-3 meteors per hour, depending on the Moon phase, which reduced meteor rates due to the bright background of the sky. During this month, TV and photographic fish-eye cameras observed 7 fireballs. The brightest fireball was about -10th magnitude. The orbit of the "Kozmice" fireball from April 14 was also observed by our TV system and the EN photographic cameras for which Spurný (pers. comm. 2007) calculated its precise orbit. 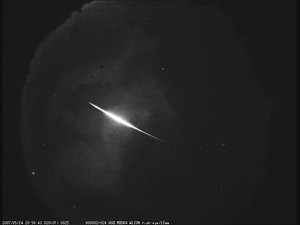 It is already one year of regular meteor observation by video system.Until now we observed during 177 nights, which resulted to more than 10000 recorded meteors. Fo instance we observed more than 500 Geminids in the night December 14/15, 2007. 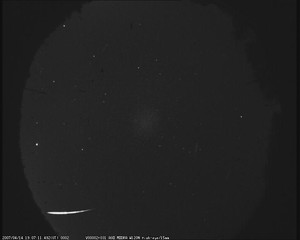 We are prepared for observations of the Leonid meteor shower with expected maximum in the early morning (5 CET) Nov. 19 2002. More informations can be found in Press Release 13.11.2002

Leonid meteor in Orion constellation. The picture is a part of all-sky image recorded at Astronomical Observatory Modra, Slovakia. The exposure begun at 2:01:50 UT and ended at 4:43:00 UT on November 15, 2001. 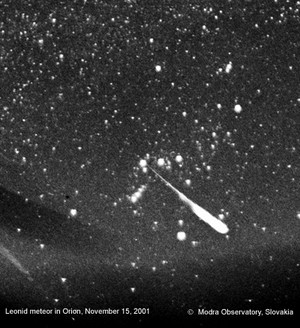 We are prepared for observations of the Leonid meteor shower with expected maximum at night from Nov 17/18 1999. More informations can be found in press release. 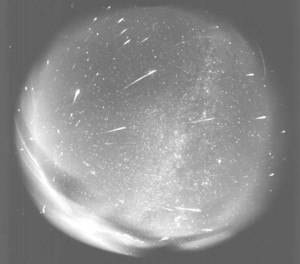 This image shows 1998 Leonids meteor shower. I mage was obtained at the Astronomical Observatory Modra (Astronomical Institute of the Faculty of Mathematics, Physics and Informatics, Comenius University Bratislava ) through Zeiss Distagon (fish-eye) objective 3.5/30 mm. This equipment is used in Slovak part of the European Fireball Network which is coordinated by the Astronomical Institute of the Slovak Academy of Sciences and Astronomical Institute of the Academy of Sciences of the Czech Republic . Exposure in the guided mode begun on November 16th 23:33:00 UT and lasted more than 4 hours till November 17th 3:37:10 UT. About 150 bolides brighter than -2 mag can be seen. The brightest fireball is about -8 mag. Zenithal hourly rate of the shower estimated from visual observations was about 400. You can download image in higher resolution ( 400 dpi, 1246 kB ) for free but it's not for commercial use. In case of publishing, please, let us know on one of our addresses. 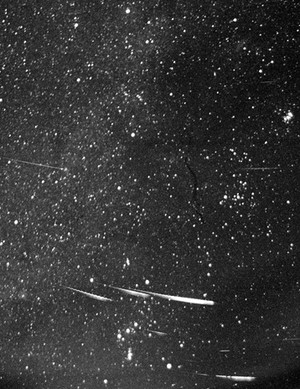 Zoom 1 : Leonids crossing interesting places on the sky. This is zoom of lower central area of the original image. Milky Way goes from middle top to lower left part. Pleiades are visible near right border and three most bright meteors go through Orion constellation in the lower central part of this image. 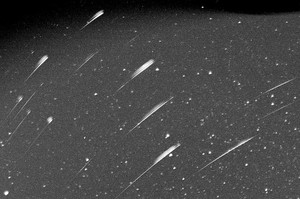 Zoom 2 : The highest density of meteor tr ails. This is zoom of upper left part of the original image. There are 15 bright meteors visible on this image. 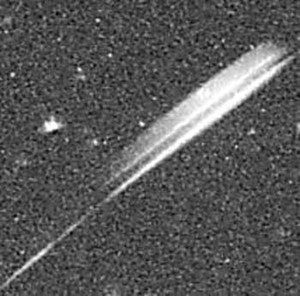 Zoom 3 : Some Leonids were bright enough to create spectrum. 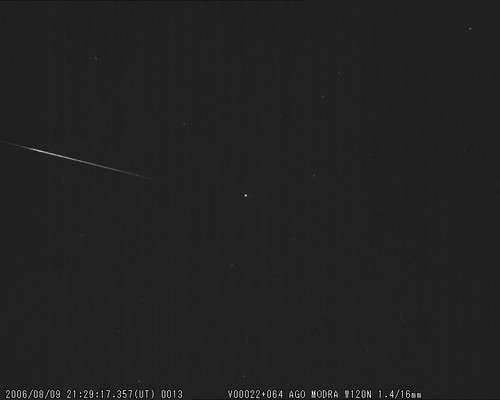 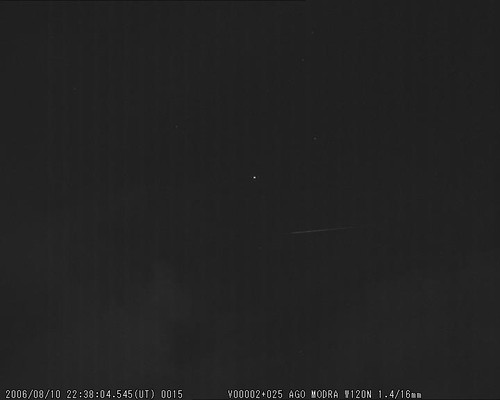 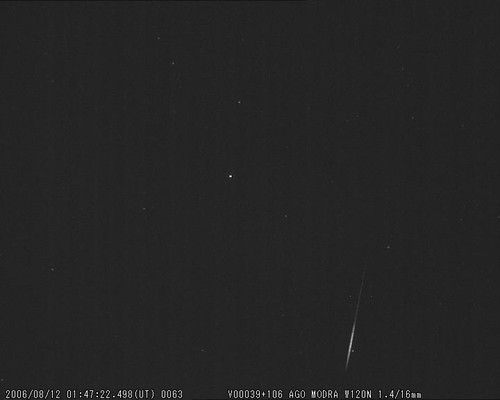