Faculty of Mathematics, Physics and Informatics > Division of Astronomy and Astrophysics > Research > ADAM-WFS

Planet Earth is a member of dynamical family of the Solar System among with millions of asteroids and comets. In contrast with the Moon which is densely covered by impact craters the Earth's surface seems to be unaffected at first glance. In reality Earth has been bombarded even more than Moon in the past. However, the erosion due to water, air and tectonic movements cleared most of the impact records. Still, geologists were able to discover almost 180 impact structures on the surface of Earth that witnessed catastrophic events of the past.

Nowadays, tens of tons of cosmic dust, micrometeorites and meteorites enter Earth's atmosphere daily. From time to time attention of people is dragged by a spectacular bolide and possibly a meteorite that survives its flight through the atmosphere. On of such meteorite landed near Košice in Slovakia in 2010. Asteroids with few meters in diameter bring more kinetic energy which dissipates in a form of blast or explosion that could cause damage or injuries as in case of recent events near Russian town of Chelyabinsk on Feb 15, 2013 or Tunguzska event in 1908. Kilometer-sized impacting asteroids have fatal and catastrophic consequences and their effects are understood from deep layers of Antarctic or Greenland ice cores or fossilized life forms. All mass life extinction events could be tied to a large impact crater.

Collision with a 1-km size killer asteroid is rare - it appears once per millions years. Small, 50-m sized asteroid, similar to 2012 DA14 or Tunguzska meteoroid, occurs once per centuries. Few meter sized body hits the Earth few times per year. Nowadays not just the science drives research and search for Near Earth Asteroids and impactors. It is also a planned human-piloted mission to an asteroid, planetary defense and search for sources of metals and precious elements.

Košice meteorite (a remnant of 1.2-m asteroid), bolide of the
Chelyabinsk asteroid (~10-m in size) and Barringer crater in Arizona
excavated by 50-m iron asteroid in size similar to 2012 DA14.

Systematic study and search for asteroids and comets that threaten Earth has begun in ninetees of twentieth century. Continuous development of telescope, image processing and computers allows to create dedicated sky surveys such as LONEOS, NEAT, LINEAR and Spacewatch that discovered majority of known large Near Earth Asteroids. The next generation of surveys - Catalina Sky Survey and Pan-STARRS - focus on search for smaller objects and comets and they try to complete the population of large objects. Near future belongs to the giant LSST telescope which would complete 100-m and large Near Earth Asteroid population, starting in 2022 in Chile. Asteroids were also found by space-based telescopes such as WISE. In the future space telescopes Sentry and NEOCam should overtake the infrared surveys of asteroids and comets.

Despite hundreds of millions dollars spent on ground-based surveys, up to billion spent on space telescope surveys and LSST, these surveys have always missed a special population of asteroids - small and near-Earth grazing objects or asteroids on a direct impact orbit. These objects are either too small and mostly too far to be detected even with a large telescope but when close they are too fast to be captured by small fields of view. Veres et al. (2006) calculated that there are 80 - 320 asteroids that comes closer than Moon yearly but we only see a very small fraction of them, some of them after their closest approach (like 2012 DA14 at time of discovery). We propose a low-cost wide-field survey system based on small but wide-field state-of-the-art telescopes equipped with monolithic CCD cameras, automated operation, image processing, object detection and intelligent warning system. ADAM-WFS is similar to ATLAS project.

The survey telescope ADAM-WFS (Automated Detection of Asteroids and Meteoroids) is based on 4 identical wide-field objectives Houghton-Terebizh 300/1.44 that are able to capture 96 square degrees of the sky in a single shot and entire night sky per night with a resolution of 4.36"/pixel. Large pixels and antiblooming are optimized towards the detection of fast and therefore highly trailed objects in the Earth vicinity. The system will use software for image processing and object detection developed at University of Hawaii, currently used for Pan-STARRS, WISE and in the future by LSST. The system will be developed and operated as a prototype at the AGO Modra observatory.  Later it could be migrated to Southern and Western hemisphere. Results of the survey efficiency and selected findings are presented on following figures.

Optical design of Hoghton-Terebizh wide-field telescope, a hearth of
ADAM-WFS. 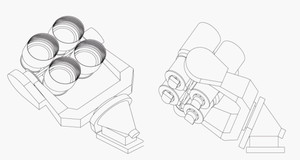 Mechanical design of 4 telescopes attached to a mount with a total FOV
of 96 square degrees with a limiting magnitude of 17.5. 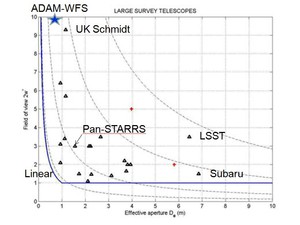 Comparison of past, current and future telescopes' field-of-view vs.
aperture with proposed ADAM-WFS system. 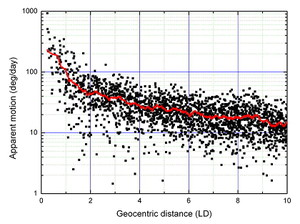 Simulation of apparent rate of motion of known asteroids at their
closest approach to the Earth, based on all close approaches of known
asteroids between years 1900 - 2200.

Theoretical range of the telescope as a function of phase angle and
geocentric distance assuming constant albedo 0.14. 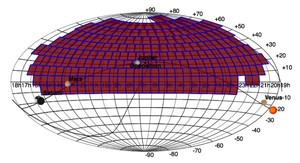 Boresigh centers of simulated one year survey at the celestial sphere. 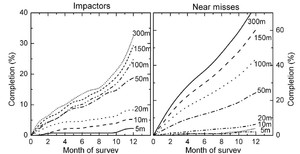 Results of the simulation - survey efficiency in finding imminent
impactors that impact during the survey as a function of their diameters
and asteroids flying closer than 10 lunar distances.

Simulations shows that in a year we could discover 30 - 120 asteroids larger than 10 meters and similar number of 1 - 10 m asteroids that come closer than 10 lunar distances.

4. Monitoring and characterization of orbital debris.

1. Low-cost. Most of survey telescopes and projects were, are and will be orders of magnitude more expensive.

2. All sky vs. deep survey. Instead of imaging very faint magnitudes and a little per-night coverage we will cover entire sky per night with lower limiting magnitude.

3. Do NOT reinvent the wheel. We will use existing methods, software pipelines, approaches and technology. We will not spend many years on development and testing. The project will purchase as much as possible off-the-shelf solutions. This will keep the budget down.

4.Compact team. Instead of wide team and numerous people involved, our team will rely on individuals with personal experience on survey telescopes (Pan STARRS, ATLAS) and external cooperation and consultations.

5.Existing infrastructure. The prototype will be built and used on existing observatory without the need of significant resources on constructing support structures and buildings. Most of the labor and engineering would be done on the site in own workshop (without external subcontracting). We encourage deployment of future ADAM-WFS systems on existing observatories and sites with infrastructure. Existing larger telescope on the site dedicated for immediate follow-up of reported targets is crucial.

6. Focused on asteroids. Surveys are generally focused on multiple interests. ADAM-WFS will be optimized towards asteroid survey. Of course, it will deliver data for more science.

If you are interested in the space around the Earth and would like to financially contribute to this project and to search for dangerous Near Earth Asteroids or search of the future resources of precious metals or protection of future space tourists or commercial satellites against the orbital debris, we will gladly welcome you and accompany through our facility, present detailed budget and project and offer a partnership or membership of our science consortium. The project is prepared in a cooperation with the Institute for Astronomy, University of Hawaii at Manoa.