This workshop is sponsored by the VEGA 1/0577/14 grant aimed at investigating the relations between Semigroup Theory and Combinatorics. 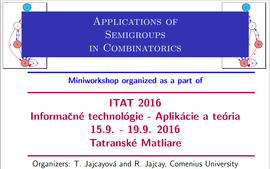