Abstrakt:
Most near-Earth objects (NEOs) escaped from the asteroid belt between Mars and Jupiter due to non-gravitational thermal forces and gravitational interactions with Jupiter and Saturn. The dynamics of how these objects evolve in the inner solar system is well understood and has been used to predict the orbital nature and size-frequency distribution of the NEO population. However, as NEO discoveries have increased, problems have emerged with existing NEO models. For example, many NEOs should be on orbits that closely approach the Sun yet few have been discovered. In addition, even though the NEO population is roughly an even mix of low-reflectivity (<10%) and high-reflectivity (>10%) asteroids, the characterized NEOs with small perihelion distances show a strong preference for high albedos.  Our new NEO model shows that the deficit is likely produced by the super-catastrophic disruption of a substantial fraction of the small and mid-sized NEOs when they reach perihelion distances of a few tens of solar radii. 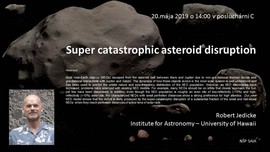